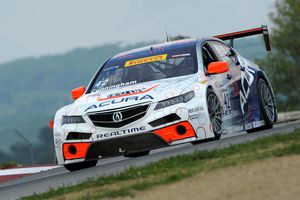 After months of preparations, but limited track time, the Honda Indy 200 race weekend was the first chance for RealTime to see how the new TLX stacked up against the stiff World Challenge GT class competition that includes, the Porsche GT3 R, Cadillac CTS-V R, Audi R8 Ultra and Ferrari 458 GT3 Italia, among others.

Cunningham qualified the TLX 24th for Race 1, confident that the all-wheel drive car would advance through the field during the Saturday race, especially if the forecasted rain arrived as scheduled. 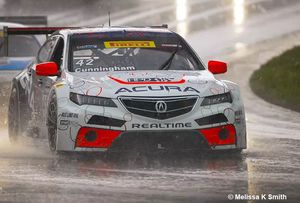 Not only did the rain arrive, it flooded the 13-turn, 2.258-mile circuit 30 minutes into the 50-minute race. A full-course caution was issued but not before numerous cars slipped and skated off track. Cunningham kept the No. 42 pointed in the right direction and when the red flag came out and brought a premature end to the race, he had held on for a 13th-place finish. Though not the finish the team is used to, it was a proud debut effort for a brand new racecar.

“It’s a shame the rain got as bad as it did because I think our all-wheel drive TLX had the moves to pick up some more positions in front of Honda’s home crowd,” Cunningham said. “Still, after months of tireless preparations, this was a debut to celebrate today and shows we are on the right path for developing our platform.”

Fast race laps from Race 1 put Cunningham’s Acura 19th on the 51-car grid for Sunday’s Race 2. If Saturday’s race felt like a missed opportunity, Sunday’s race was more of the same.

The weather was much improved for Race 2, but in the first restart from yellow, while battling near the top 10, the TLX was struck entering the Keyhole and nearly sent into the gravel. Cunningham kept the car on track, but was quick to bring the car into pit lane for a quick lookover by the crew.

After determining the car was okay to continue, Cunningham was back underway, but out of the hunt. He crossed the finish line 19th, a finish clearly unrepresentative of the TLX’s ability, as lap times showed the car continued to get faster throughout the race and even turned its quickest lap of the weekend on the final lap. 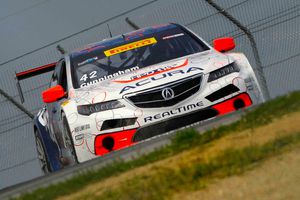 “The car kept getting faster with every session all weekend,” Cunningham said. “Our times are still not where they need to be, but we cut the deficit by more than one half by the end of Race 2. We had zero issues with reliability, which is a tribute to Acura, HPD and RealTime. The competition and manufacturer involvement in the GT category is staggering, so looking back on what we accomplished at Mid-Ohio, we’re pleased with the progress we’ve made and we look forward to Sears Point in three week’s time.”

The Pirelli World Challenge doubleheader from the Honda Indy 200 will air on NBC Sports, Sunday, Aug. 10 at 1:30 pm ET.

Next up for Cunningham and the RealTime Racing crew is a trip to the West Coast and Sonoma, California, for the Sonoma Grand Prix, Aug. 22 – 24.