F1 has arrived in Sao Paulo Brazil for the 49th running of the Brazilian Grand Prix. Having played witness a to myriad of Formula 1 history over the years, the Interlagos circuit holds a special place in the hearts of fans and drivers as it packs several highly technical turns and substantial elevation change into a short distance. It also holds the distinction of being one of two counterclockwise circuits on the F1 calendar. This weekend will feature F1’s sprint qualifying format for the final time in 2021.

After a dominant showing in Mexico Red Bull unquestionably have momentum on their side as they come to Brazil and a circuit which has historically been strong for the team, Max Verstappen in particular. Look for another double podium finish to be a strong possibility in Brazil. On the AlphaTauri side of the garage Brazil has also been a happy hunting ground for the sister team. Look for one car solidly in the points with the second car also a candidate for points.

Elsewhere on the grid, Mercedes will have their work cut out for them for several reasons, not the least of which is Lewis Hamilton receiving a 5 place grid penalty for taking a new ICE . Despite Ferrari coming on strong in the second half, look for McLaren to bounce back as best-of-the-rest in Brazil. That doesn’t mean Ferrari won’t be right on their tail waiting for an opportunity to pounce. Next up we can expect to see the pair of Alpines working with each other to stay ahead of the entries from Aston Martin. At this point in the order we may see some team cars from the higher midfield runners before we get to what should be a strong battle between Williams and Alfa Romeo. Last but not least both Haas drivers will bring up the rear as the season is mercifully one race closer to ending for the American squad. 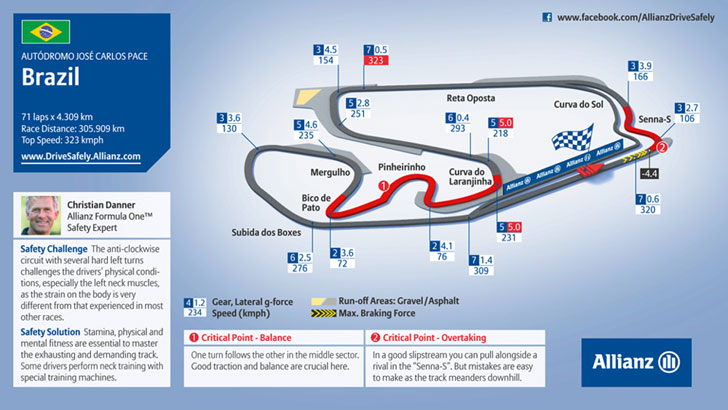